How do you know if you’re fearless or just plain mad? 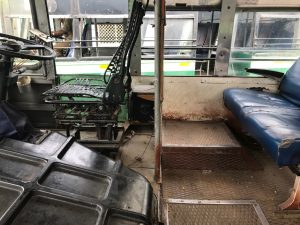 Twenty years ago I promised myself I would never come to India without a male and would never in a million years get on one of their public buses. Yet today I find myself squashed into an overcrowded filthy run down public Indian bus watching the man in front of me pick out his ear wax and neatly spreading it over the back of the seat in front of him.

I had to make a run for it to clamber to get onto this rust bucket to Rishikesh and nearly lost my backpack because the bus took off while I was in the bus, but I hadn’t quite pulled my backpack up the stairs yet. All the Indian men watching me just stared as they generally do when they see this lone white woman. Helping out clearly wasn’t on their agenda, however I eventually dragged my bag up the stairs and after pushing my way through these men finally a lovely old man squeezed over and let me share the edge of his seat.

It’s my last leg since I left Chennai in South India yesterday. In the last 24 hours I almost missed the plane because they don’t call the flights, I’ve had to fight my way through dozens of rickshaw owners and taxi drivers hammering me for their business, I walked down a filthy back alley in the crazy frenzy of Delhi following some guy that assures me my hotel is down here somewhere. This was after having at least 3 scammers at the train station try to make me miss the train so they can arrange alternative transport for me.

The last rickshaw driver assured me this hotel I had booked was no good and he wanted to take me to his cousin’s hotel, regardless of the fact he kept forgetting the name of my hotel and clearly had no idea where it was, as I had to direct him. Thank God for Google maps!

In the past nine months in India I’ve lived in an ashram, then with an Indian family in a village, followed by my own apartment in a bigger town and of course lots of guest houses and places they like to call hotels, mmm… I’m not so sure you could call some of them by that name. By travelling on my own I’ve learned to stand up for myself like never before, bargain every price down without blinking an eyelid, eat 3 curries a day with hands only and I’ve forgotten what clean streets, running showers and toilet paper looks like.

Anyway, while I’m watching this man make patterns with his ear wax and listening to the blasting Indian music that sounds like a cat’s in trouble, as well as trying not to slide off the edge of this seat whilst the bus driver swerves like a mad man amongst the most chaotic traffic one could imagine—I get a text message from Vodafone.

Vodafone were offering a free service for women to help empower them so they can explore the world fearlessly. So of course I had to think about that and check in with myself. Even though I’m not convinced that I’m on the right bus as no one here speaks English, I check in and find only calmness, satisfaction that all is well and if I am on the wrong bus, oh well, there will be another. I feel content, happy and very present and peaceful. I don’t feel any fear yet I’m also proud to be mad, so perhaps it’s a bit of both. I’m wondering if Vodafone are offering The Grace Method hahahah.

← When everything becomes a meditation